February is Teen Dating Violence Awareness Month (Teen DV Month). Statistics show that one in three teenagers will experience emotional, physical, or sexual abuse in their 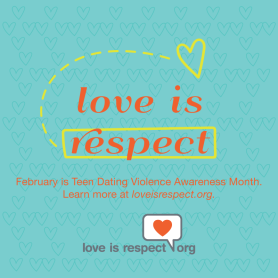 relationship, and that dating abuse affects 1.5 million teenagers every year. In addition, girls and young women between the ages of 16 and 24 experience the highest rate of intimate partner violence – a rate that is nearly triple the national average. Teen DV Month was created to educate teenagers and their supporters about unhealthy relationships, and to provide information on how to prevent dating abuse.

Why Focus Specifically on Teens?

Dating violence or abuse can have lasting effects on teenagers who experience it. Victims who experience violent relationships as teenagers are at higher risk for eating disorders, substance abuse problems, and additional domestic violence. Teenage girls who have been sexually or physically abused are twice as likely to contract a sexually transmitted infection, and six times as likely to become pregnant. Furthermore, fifty percent of youth who have been victims of both rape and dating violence attempt suicide.

What Does Teen Dating Violence Involve?

Loveisrespect, an organization created to engage, educate and empower young people to prevent and end abusive relationships, notes that dating violence can include any of the following:

How Can I Help?

One way you can help is to know the signs, such as those listed above, that may signal an abusive teenage relationship. Awareness is key, as only 33% of teenagers who experience dating violence tell anyone. In addition, 82% of parents say they could recognize the signs if their child was experiencing dating abuse – but in reality, 58% of parents couldn’t accurately identify all the signs of abuse.

Another way to help is to educate others, and help raise awareness via your social media accounts. Loveisrespect has declared February 13-17, 2017 “Respect Week”. You can post information relating to teen dating violence using the following hashtags: #RespectWeek2017, #teenDVmonth, and #loveisrespect.

In addition, February 14th, 2017 is Wear Orange Day. Loveisrespect has created the #Orange4Love challenge. On February 14th, wear orange to show your support for healthy relationships. Post pictures of you and your friends wearing orange, and use the hashtags #orange4love and #RespectWeek2017. Make sure to share in your caption the reasons why you’re wearing orange that day, such as in this example: “I wear #orange4love because 1 in 3 teens experiences dating abuse & that’s 1 too many! #RespectWeek2017”

Everyone deserves a safe and healthy relationship no matter their age. With your help, we can continue to raise awareness about teen dating violence, and hopefully change the statistics.

Ashley Jones is a Raleigh-based marketing professional, actress, and volunteer. View all posts by Ashley Jones