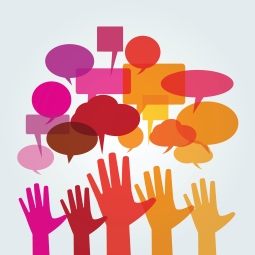 Truthfully, I wanted to somehow be a part of “The Vagina Monologues” (TVM) in Raleigh in some way. I hadn’t seen it since I was still in San Diego. Since moving to the Triangle in 2013, I kept my eye out for a production of TVM that wasn’t in a college setting, but my search didn’t turn up much. Finally, in 2016, TVM popped back into my mind after a colleague of mine was killed by her husband, and then he committed suicide. After the results of the presidential election, and encountering more stories of domestic violence happening locally in the area, I felt 2017 would be the most important year to do TVM. So, in less than a month, I found an incredible group of women who were willing to go along with this crazy idea. I rediscovered V-Day and things were rolling. You know the rest of the story.

But what was the motivation behind this?

I’m someone who doesn’t do well in public speaking. I’m not a leader in that sense. But I can prepare and present something to you with practice. I needed to find a way to not only make my voice heard, but also speak on behalf of the millions of victims out there who are in an abusive relationship. Why did I care so much about this? I come from 2 generations of survivors. My grandmother’s first marriage was abusive, and she managed to escape. She then met my grandfather not too long after. Then, my father was very abusive to my mother. One of the first things my great-grandmother told me was that my dad once dragged my mom across the parking lot by her hair while she was pregnant with me. Unfortunately, my mother let the damage he caused her affect her for the rest of her life. I can elaborate more, but that’s a story for another time.

I’ll give you the short version and say that sometimes the cycle of abuse can be passed on to the next generation. I found myself in an abusive relationship in my teens, and then late teens, with the same guy. Even after breaking the cycle for myself and moving on, I still feel shame and foolishness for allowing myself to get into a relationship like that…twice. It almost happened a third time after I moved to Raleigh. Hadn’t I learned? While I shouldn’t, I still beat myself up about it. I come from a long line of strong women. This shouldn’t have happened. But it did.

As someone who is in a decent place now, I want to do more, and I need to do more for my community. My passions are in theatre. Art can be a catalyst for change, it can make a major impact to those who bestow upon it. Through TVM, we are raising money for InterAct of Wake County. With the audience encountering the stories of different women and their relationship with their vagina, we are communicating what exactly is wrong with our society still. Sure, on paper, women have equal rights, but real life experience still shows it’s not the case. Theatre is one of the most versatile venues to make these stories known, or to have them be told again. As women, we need to come together to support each other and do what we can to help those who are down.

As long as violence against women and girls still happens, we will still make our voices heard through art and activism.

As we get closer to the performance of “The Vagina Monologues“, I hope Raleigh, Durham, Cary, Chapel Hill, Wake Forest, Zebulon, Wendell, Timberlake, Apex, and beyond…will all grace us with the honor of their presence. Be a part of this crazy idea I had, grab a ticket to the show, and see what all the fuss is about!

Alex Matsuo is an author, podcaster, and paranormal investigator. She received her Master of Arts in theatre at San Diego State University. Alex is the founder of the Association of Paranormal Study. When she is not writing, talking into a void, or looking for ghosts, she is working a regular job and lives in North Carolina. She loves all thing anime, sci fi, and other various geekdoms. View all posts by Alex Matsuo

1 thought on “Why “The Vagina Monologues”?”